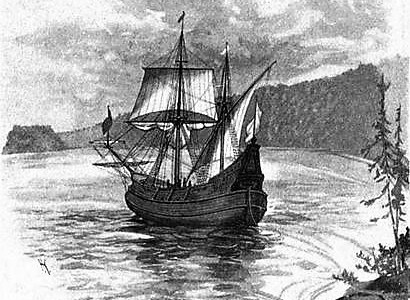 Deep into several research projects, including one exploring early Jersey City history, I’ve been leafing through books and jotting down notes at the New York Public Library or the Jersey City Free Public Library on many evenings and weekend afternoons.

END_OF_DOCUMENT_TOKEN_TO_BE_REPLACED

My blogging has been sporadic during the past several months, and my attention has wandered far afield from my original subject of Jersey City. This post marks an intellectual return to the forgotten Dutch empire on the banks of the Hudson River.

Following the Pavonia Massacre, hostilities between Dutch colonists and the surrounding Native American tribes continued until a treaty was brokered in 1645. Two years’ later in 1647, Willem Kieft was recalled to the Netherlands to account for his troubled leadership and management of the colony. Peter Stuyvesant arrived in New Netherland in 1847 to replace Kieft as the Director-General. Kieft died in a shipwreck off the coast of Wales en route to Amsterdam to address  the charges against him. END_OF_DOCUMENT_TOKEN_TO_BE_REPLACED

The name Pavonia appears throughout eastern Jersey City. Pavonia Avenue runs through the downtown and past the Journal Square section. There is a Pavonia branch of the Jersey City Free Public Library. Most residents associate the name with a robotic voice announcing the Pavonia-Newport stop on the PATH ride from Manhattan into Jersey City. The Pavonia-Newport station was rechristened the Newport station only several years ago. What was Pavonia? A person? A place? Or a thing? Is there still a Pavonia in Jersey City?

END_OF_DOCUMENT_TOKEN_TO_BE_REPLACED

What was New Netherland? Where was it? Before delving into the promised exploration of Jersey City’s Dutch heritage, I’ll try to answer these crucial geographical questions with a gorgeous map.

END_OF_DOCUMENT_TOKEN_TO_BE_REPLACED

The next few several posts (final and exact number to be determined) initiate the first historical project here at Another Town on the Hudson.  Over the next several weeks, Another Town on the Hudson will explore a fascinating but largely forgotten chapter of early American history: New Netherland. Specifically, the forthcoming writings will linger on the short-lived Dutch settlements in Jersey City in the seventeenth century.