Last week, I attended an entertaining and fascinating lecture on the Lenape Indians, the indigenous people inhabiting the New York metropolitan region and the entire Garden State prior to European exploration and colonization. Where might you ask?

At the Apple Tree House. Right in Jersey City. 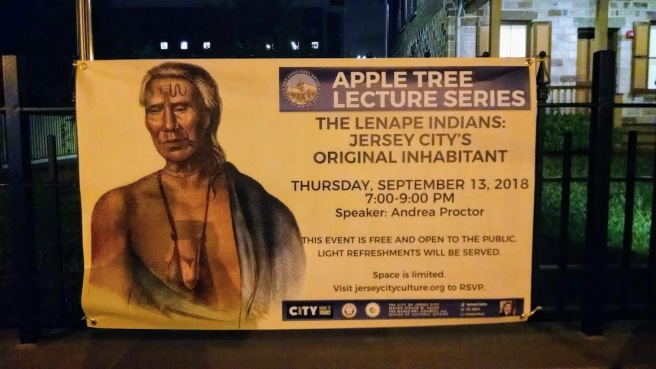 The Apple Tree House is a beautifully restored building dating from the early eighteenth century. The home originally operated as a farmhouse and was owned by the Van Wagenen family from 1721 to 1946. The Quinn Funeral Home opened in the building in 1947. The Apple Tree House’s restoration captured both the Dutch Colonial and the Victorian styles to honor the full life of the building.

Since the Apple Tree House’s official restoration in late 2017, the Jersey City Office of Cultural Affairs has organized lectures on the site. The subjects have included architecture, music, geography, sports, and history. The quality of the talks and speakers has been excellent.

Sitting in the House’s Victorian parlor, a guest can easily imagine that he or she is listening to an august scholar in a private library or salon in the late nineteenth century.  Maybe in London. Or Paris. Or New York.

Welcome to the Apple Tree House in Jersey City, New Jersey in 2018.

The Jersey City Office of Cultural Affairs currently hosts one or two lectures each month at the Apple Tree House. If you’re searching for intelligent conversation and an enjoyable evening, reserve a seat at the next event.