Since the early days of the ongoing pandemic, various news outlets have published stories chronicling affluent New York City residents fleeing the metropolis for more spacious and isolated homes in rural hamlets in the Empire State or other regions of the country.

Unfortunately, a familiar pattern of demographic displacement and cultural sanitization seems to have spread with the moneyed class. Journalist and writer Sara B. Franklin described the sudden changes in her town of Kingston, a small city on the Hudson River in Ulster County, New York, in a recent New York Times column. 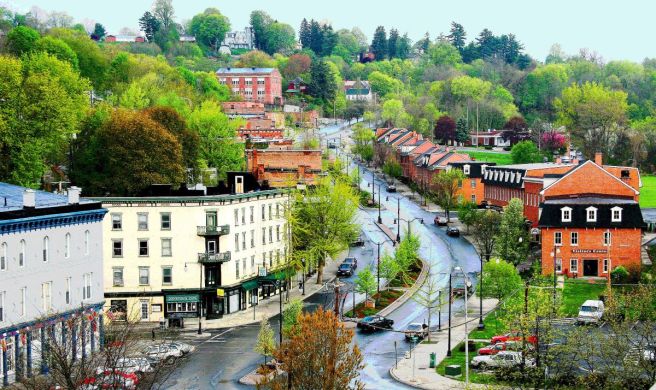 Franklin and her contemporaries, largely members of the artistic and creative class, left New York City for “a slower, more affordable life.” They found themselves charmed by Kingston’s small-town feel, diversity, social activism, and tight creative community. There, they hoped to craft a different way of living.

Then, COVID hit. Franklin and her community found itself struggling with unemployment and instability just as a wave of wealthy New Yorkers began bidding wars over every available home on the market. This was not the gradual, long-studied multi-cycle process of gentrification. According to Franklin, Kingston transformed almost overnight:

“In a single season, the human landscape of this place has become unrecognizable.”

Critics and scholars might point to Franklin and other creatives as part of the problem–the igniters of gentrification and displacement. That blame is misplaced.

As a group, artists, writers, and other creatives are anything but affluent. Although educated and possessing social capital, they often barely belong to the American middle class. The creative class largely aligns itself with itself with activists, residents, and others combating runaway gentrification.

How does the creative class impact or change a neighborhood, town, or city? Its members help enhance the character and culture of given locale. They help create a sense of identity. Unfortunately, that might make a place attractive to investors and others with means. Once that happens, the creative class finds itself marginalized and pushed out. The place no longer belongs to them.

Over the past several decades, the creative class lost its foothold in New York and other increasingly global American cities. Now, cultural commentators wonder if the exodus of the wealthy from Manhattan, Brooklyn, and elsewhere might open new spaces for creatives. Might New York even regain its soul? If so, the price appears to be Kingston and other towns losing their own.

If you enjoyed this post, you can support the blog at Ko-fi.